Charley Harper’s Beguiled by the Wild 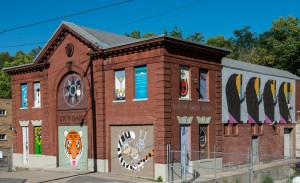 In partnership with the Cincinnati Zoo and Botanical Garden.  This series of 18 murals spans the career of Charley Harper, celebrated Cincinnati artist.  Harper, who studied and taught at the Art Academy of Cincinnati, is best known for his images of the natural world created in his distinctive ‘minimal realistic’ style.  These murals fittingly adorn the sides of the City Barn; a site which originally housed horses used to pull trolleys around the city and is now owned by the Cincinnati Zoo and Botanical Garden.  All of the animals represented in the Harper murals can be found living at the zoo.