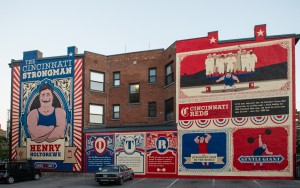 In partnership with 3CDC & Over-the-Rhine Chamber of Commerce. This mural celebrates Henry Holtgrewe, one of Cincinnati’s most colorful characters.  A German immigrant, local entrepreneur, and resident of OTR, Henry was touted as the world’s strongest man.  This bold mural design draws inspiration from turn-of-the-century commercial advertisements, catching the eye with ornate details that recall the Italianate architectural style of the surrounding neighborhood.  Panels of text in the center recall the folklore surrounding Henry and his beloved Over-the-Rhine community.  Illustrations feature his remarkable appearance and amazing feats of strength, including the time he lifted the entire Reds baseball team with his back!  ArtWorks is proud to present this mural to the OTR community in honor of Henry Holtgrewe and all of his descendants who still call Cincinnati home today.