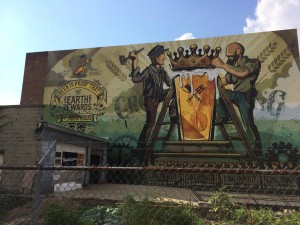 In partnership with the Brewery District Community Redevelopment Corporation.  Inspired by Cincinnati’s rich brewing history and undeniable resurgence, this mural celebrates the contribution beer-making has made to the development of our City and heralds its promise to the future of our region.  This mural features workers – one from the past, the other from the present – as they place a crown on a beautifully crafted beer representing the pride of the Queen City.  Cincinnati brewers carved out their livelihoods from the rolling Ohio River hills, turning raw materials and initiative into good beer and a great City.  This mural welcomes visitors and marks the gateway to Cincinnati’s revitalized Brewery District, a significant and nationally recognized historic neighborhood.